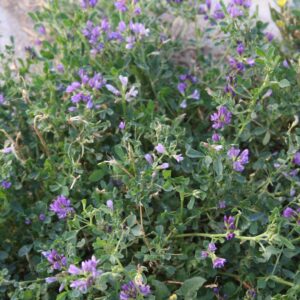 Medicago sativa, or Alfalfa as it is more commonly known is, in my opinion, a top super-herb even among superfoods.

The human body and all its intricate systems need a variety of vitamins and minerals each day to properly function at full capacity. If there is a deficiency in any one of these, the body will pull what it needs for its systems to function or to repair a sick or injured area, from other parts of the body.

This process of pulling vitamins and minerals repeated over time can slowly weaken the body. To be at our maximum functioning ability we must put all the vitamins and minerals our bodily systems need into the body, while also taking into consideration they are in a form the body is able to properly absorb and assimilate.

For example, we can put 2000mg of vitamin D into the body each day, but if the body does not have the proper minerals available to break down this source of vitamin D, it will simply travel through the systems of the body and eventually exit through the bowels without being assimilated and utilized where it was needed.

To be sure our bodies are able to make the proper amino acids to break down and assimilate all the good things we put into it, we must be sure to give the body all the correct tools (vitamins, minerals, trace minerals, etc.) it needs to do so.

A superfood is a food that is one of the strongest as far as nutrition for the body. These foods can be used to keep a healthy body vibrant, but will also bring an ailing sick body back into a state of health, especially when complimented by herbal treatments that target specific organs or tissues in the body.

Alfalfa is one of the “top of the top” in the super foods group as it contains about every mineral known to man. It’s roots can reach near 40 feet below the soil allowing it to gather into itself a large array of minerals and vitamins, making it a superior choice for excellent nutrition.

Alfalfa is a rich source of vitamin K, vitamin C, copper, manganese, riboflavin, iron, magnesium, thiamine, and folate. One cup of alfalfa contains 1 gram of protein in the form of fiber. It also acts as a strong antioxidant helping prevent damage to cells caused by free radicals.

Known also by the name Lucerne, alfalfa is part of the legume family but is also considered a herb. When in its young state, its appearance resembles clover. It is easy to confuse the two without intricate knowledge of the visual characteristics of each.

Like all legumes, Alfalfa’s leaves are trifoliate with long narrow leaflets. Its leaflets are serrated at the tips, typically less than half margin. Clover’s leaflets on the other hand, though similar in size and shape, the serrate margin is over half verses just the tip.

The leaves are alternate along the stem consisting of three leaflets which are narrow and about 2 to 3 times as long as wide. The center leaf has a short stalk.

Alfalfa’s flowers are generally purple but some varieties are also found in shades of white and yellow. The flowers are short and the clusters appear somewhat one-sided. Each cluster can contain from 10 to 20 flowers.

The seeds are kidney shaped and typically yellow to greenish-yellow in color, though they begin to brown with age. Clover seeds tend to be a lighter yellow in color than Alfalfa.

Alfalfa is grown by farmers but is also found growing wild in about every state in the United States. It is a perennial legume that gets quite tall reaching 24″ to 36″, or about 1 meter in height.

Alfalfa can be found growing wild in both rural and urban areas. Because its roots reach incredibly deep into the ground, it can survive some flooding, so long as the water levels recede fairly quickly. Alfalfa prefers moderate to well-drained soils that are neutral to high pH.

Alfalfa can be found growing wild in meadows, fields, vacant lots, along roadsides, and near rivers and woodlands. Though it can grow almost anywhere, Alfalfa is not an aggressive invader of other plant habitats.

The leaves are the most commonly used part of the Alfalfa plant. They can be eaten raw or cooked or can be dried for use later as a seasoning or tea.

The seeds can be used as a sprouted seed to make a very nutritious addition for salads and other dishes. Alfalfa’s seeds can also be ground into a power and mixed into flour to up the nutritional value of breads and other baked goods.

There are specific herbs for every organ and tissue in the body. When targeting specific health issues, we turn to these herbs for use in a complimentary manner along with the basic vitamins and minerals every body needs to function at a healthy state.

The herbs and herbal formulas that keep a healthy body in good health can also be used to bring an ailing unhealthy body back into a state of vibrant health. The body has an amazing ability to heal itself if it has the right tools to work with.

Since Alfalfa contains a wide variety of vitamins and minerals, this makes it an excellent herbal aide when dealing with several conditions, especially those caused by nutritional deficiencies.

Traditionally alfalfa has been used medicinally as an anti-diabetic agent as it has the ability to lower blood sugar levels by stimulating the release of insulin from the pancreas.

It has diuretic properties, meaning it promotes the excretion of water from bodies, so it can be used as an aide in lowering blood pressure, treating arthritis, and dissolving kidney stones. More research is necessary to properly document its use with kidney stones however; it has shown promise in this area.

High vitamin K content makes alfalfa an excellent blood purifier and aides in clotting of the blood helping to prevent hemorrhage. This quality can counteract some blood thinning medications so individuals taking these types of medications should consider checking with their physician before drastically changing their diet to include large amounts of vitamin K.

Being a blood purifier alfalfa also fights against toxemia, also known as pre-eclampsia, making it a superior choice for pregnant women Preeclampsia is a condition that occurs in pregnant women when toxicity in the blood gets too high. It has been suggested that large amounts of alfalfa may cause uterine contraction however, so pregnant women prone to preterm delivery should moderate their intake. 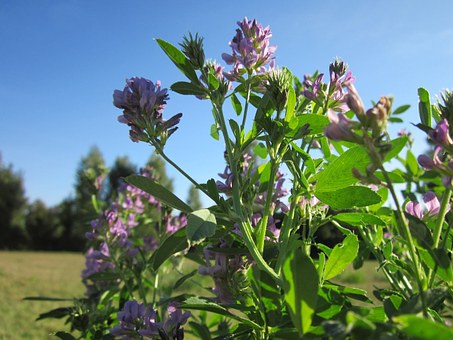 Alfalfa contains phytoestrogens, chemicals which are similar to the hormone estrogen, so it is effective in helping balance hormones, especially in women.

Alfalfa can be used as an infusion to stimulate the appetite. It has also been known to give the body a boost in energy and endurance. Alfalfa has been known to be helpful in the treatment of alcoholism and drug dependency.

With its superb nutritional value, it’s no small wonder that Alfalfa can help treat a wide range of illnesses and ailments. Alfalfa root system can reach up to 40 feet under the ground, giving it the ability to gather into itself about every mineral known to man.

Although Alfalfa can be grown and harvested to be used fresh, it is also widely available in supplement form or included in many herbal multivitamin supplements. It is a key component in my daily herbal routine and I hope now you can see why adding it to your diet can be so beneficial.

Alfalfa is a superfood that can be of benefit to everyone’s body. You will clearly notice a difference in your health and a pep in your step.